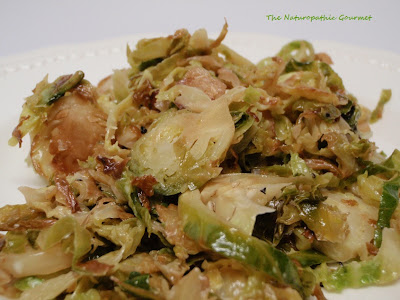 More than the sum of its parts, this simple side dish will leave even the most adamant Brussels sprouts skeptics asking for more. Sautéed until caramelized and golden brown, these sprouts are both savory and slightly sweet.

One secret is slicing them thin, which can be done by hand, but a food processor will make preparation a snap. (In fact, this dish may be what I use my food processor for most often.)

The other secret is waiting until the end of cooking to add salt. If you add it too soon, the osmotic effect will draw water out of the sprouts and stop them from browning. It is helpful to add a little salt if they start to stick before they start to brown, when a bit more moisture is needed, otherwise season them once they have caramelized.

I always slice as many sprouts as will fit into my largest skillet to ensure leftovers, which make a nutritious and delicious lunch or snack. (This morning, they were my breakfast.)

Warm the olive oil in a large skillet over medium heat. Add the sliced sprouts and sauté, stirring occasionally, until golden brown and caramelized. (Don’t stir too often or they won’t have the chance to brown.)

Season to taste with sea salt, freshly ground peppercorn and nutmeg. Stir in add a splash of cream or half-and-half, not enough to make a sauce but just enough to coat the leaves. Serve immediately.

Anonymous said…
I'm a big fan of brussies myself. Unfortunately it is such an underrated vegetable that is all to often shunned from recipes.
January 7, 2012 at 3:50 PM