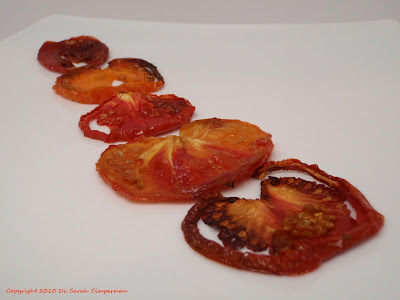 Of all the things I buy from local farmers in season, tomatoes are at the top of my list. Vine-ripened and picked fresh, their distinct flavor and juicy texture are strikingly different from bland, watery supermarket varieties.

So, as fall settles in, I snap them up while I can, anticipating the colder temperatures that will bring an end to the now plentiful supply. I eat tomatoes raw with fresh mozzarella, chop them into salsas, toss them into salads, soups, omelets and stir fry, and turn them into sauces that I can freeze to enjoy over the winter. I also dry them in the oven.

Studies show that lycopene can be helpful in the prevention and treatment of cancer through its influence on cell-signaling pathways, inducing cancer cell death and preventing the formation of new blood vessels that fuel the growth and spread of tumors. Lycopene has also been shown to increase the activity of natural killer white blood cells that destroy cancerous cells in the body.

Oven drying can be used as a method of preservation and it's a great space saver for people with small kitchens and limited storage space, a common problem in Manhattan. Unlike dehydrated tomatoes, oven-dried tomatoes still have a small amount of moisture (which lends them a wonderfully soft texture) so they need to be stored in the freezer if you don't eat them within a week. But because most of the water has been removed, they will not take up much space.

In my kitchen, oven-dried tomatoes usually don't last long enough to make it to the freezer. Savory and sweet, they are just like candy. Eat them as a healthy snack or add them to dishes in place of fresh or canned tomatoes.

There is only 1 ingredient here: thinly sliced tomatoes. Any good tomatoes will work: red, yellow, orange, green, purple. If they taste delicious when they're fresh, they'll taste even better once they are dried in the oven. I like heirloom varieties, but I use whatever looks good at the market.

Preheat the oven to 225F. Arrange the tomato slices in a single layer on a baking sheet lined with a non-stick silicone baking mat (Silpat or other). Bake until the tomatoes have lost most of their water and are starting to turn brown. This will take an hour or more, depending on the size and thickness of your slices. Be patient and check on them as needed until they are perfectly done. Do not burn the tomatoes.

Cool completely and store in an airtight container in the fridge up to one week or in the freezer for several months.