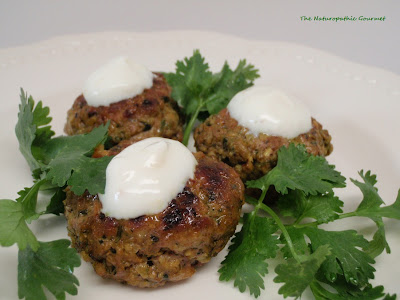 These two-bite burgers are bursting with flavor. Savory lamb pairs well with aromatics like fresh cilantro, ginger and garlic, and ground spices like cinnamon and turmeric. Golden raisins give it a sticky sweetness and pine nuts help hold everything together.

(If you're looking for a detox-friendly dish, omit the raisins.)

Turmeric has powerful anti-inflammatory and anti-cancer actions in the body, so every cook should keep it handy and use it often. Because it is not well-absorbed alone, turmeric should always be combined with black pepper and cooked with some form of fat. A study in India found that combining black pepper with turmeric increased its absorption by 2,000 percent.

This recipe calls for quite a few spices. If you don't have turmeric and black pepper, buy them. If you are missing another spice or even a few, don't sweat it, a variation will likely be just as good. If you don't have golden raisins, dried unsweetened apricots would be an excellent alternative.

In this recipe I form the meat mixture into small patties but I could just as easily make meatballs or large patties, or mold it around skewers to make kebabs. However you form it, the mixture can be made in advance and cooked on demand. The Lemon Yogurt Sauce can be made ahead as well and it couldn't be more simple. (It's just lemon and yogurt.)

This dish is a real crowd-pleaser, even for folks who think they don't like lamb. When prepared like this, almost everyone likes lamb. Find grass-fed and pasture-raised lamb at your local farmers market or search the Eat Wild database for other options in your area.

If you're feeding a crowd, consider baking the sliders instead: Arrange them on a baking tray and bake in a pre-heated 450°F oven until browned, about 10 minutes.

This sauce doesn't need a lot of seasoning because the sliders are so full of flavor. You can add a pinch of sea salt and freshly ground peppercorn if you wish. To dress it up, stir in some finely chopped cilantro and a pinch of ground cumin. Left unseasoned, leftover Lemon Yogurt Sauce makes an excellent dip for fresh strawberries.
Stir all of the lemon zest and a teaspoon of the juice into the yogurt. Taste and add more juice if desired.

Reference:
Shoba G et al. Influence of piperine on the pharmacokinetics of curcumin in animals and human volunteers. Planta Medica. 1998 May;64(4):353-6.