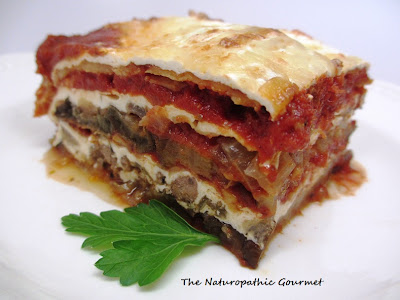 Giving up refined grains like pasta doesn't have to mean giving up lasagna. This layered dish has all the same flavors, so you won't even miss the noodles. When I served it to my husband recently he didn't even notice it was noodle-less.

My recipe calls for grass-fed ground beef but you could make a vegetarian version by substituting a layer of sautéed mushrooms, thinly sliced zucchini, and/or puréed white beans.

I recommend making enough to have leftovers because this dish will taste even better the next day. It will hold together substantially better too (so much so that you may want to bake it a day in advance, cool and refrigerate it overnight, cut it into portions, then gently re-heat it in a low oven before serving).

This recipe calls for ghee instead of olive oil because I bake it at 400F. The fragile fatty acids in olive oil become damaged by such high temperatures, so it's not a good choice for high-temperature cooking. Instead use a stable, saturated fat like ghee or rendered animal fat.

Warm 1 tablespoon of ghee in a medium stainless steel or cast iron skillet until just melted. Turn off the heat. Cut the eggplant into 1/2-inch thick rounds and arrange them on baking trays. Use a pastry brush to lightly coat the top of each round with melted ghee. Turn each one over and brush the other side. Season them with salt and pepper. Transfer them to the oven and roast until they start to soften and brown, about 20 minutes. Turn the eggplant rounds over and put them back in the oven for about 20 more minutes, until the eggplant is very soft and both sides are brown. Set them aside to cool.

While the eggplant roasts, finely chop the onion and divide it between the skillet you used to melt the ghee and a medium saucepan on the stove top. Crumble the beef into the skillet and cook it over medium heat, stirring occasionally, until browned and cooked through. Turn off the heat. Grate the garlic into the skillet, add the chopped herbs, and stir to mix everything thoroughly. Cover the skillet and set it aside.

While the meat browns, add the remaining tablespoon of ghee to the saucepan with the onion. Cook it over medium heat until the onion becomes soft and starts to brown, about 7 minutes. Season with salt and pepper and stir  in the vinegar. Continue cooking until most of the moisture has evaporated, about one minute more. Add the puréed tomatoes. Stir in the cayenne and dried herbs. Bring the sauce to a boil, then reduce the heat to the lowest setting. Simmer it, allowing it to reduce and thicken, until the other components of this dish are ready to assemble.

Once the meat mixture and eggplant rounds are ready, turn off the tomato sauce. If you plan to bake the lasagna right away, preheat the oven to 350F. 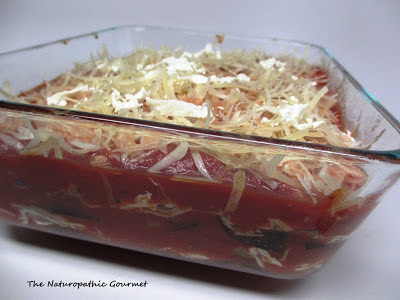 If you're making this ahead, stop here, cool it completely, then cover it and transfer it to the fridge. When you're ready to finish the lasagna, bake it at 350F until hot and bubbly, about a half hour to 45 minutes. 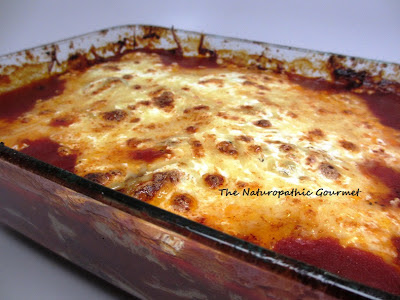 Cool the lasagna for at least ten minutes before cutting it (longer is better). Garnish with fresh herbs if you wish and serve it immediately, with a big green salad.