If chili were made in Morocco, it would likely taste like this. With ground lamb instead of ground beef. With staples like tomatoes, peppers, cumin, and smoked paprika. And with some surprises like eggplant, turmeric, cinnamon, and cardamom. This version is a bit lighter than traditional chili. It's also delicious and healthy.

Cooking with ground meats is an easy way to incorporate grass-fed and pasture-raised animal products into your diet, since they are less expensive and more widely available than other cuts.

I used bone broth as my cooking liquid but you could substitute water. I garnished the finished dish with preserved lemon, but if you don't have it, you could zest a fresh lemon over the top just before serving or leave it out entirely. Or garnish instead with roughly chopped pistachios, pitted olives, or thinly sliced fresh chili pepper.

Melt the fat over medium heat in a cast iron Dutch oven or another heavy-bottomed soup pot.

Sauté the onion, peppers, and eggplant until soft and starting to brown, about 10 minutes.

Break up the lamb and drop it into the pot. Continue cooking until the lamb cooks and starts to brown, about 7 more minutes. Stir it only occasionally to give it time to brown.

Once the meat is fully cooked, stir in the salt, cinnamon, turmeric, paprika, and cardamom. Continue cooking until the spices become aromatic, about another minute or so.

Stir in the tomatoes and scrape up any brown bits stuck to the bottom of the pan.

Stir in the bone broth and bring the mixture to a boil.

Reduce the heat to low and simmer for 30 minutes or until the vegetables are completely tender. If you have time, simmer it for an hour or more.

Just before serving, stir in most of the cilantro, reserving some for garnish.

Ladle the chili into individual bowls and garnish with a dollop of yogurt, the scallions and reserved cilantro, and some slivers of preserved lemon if it's available. 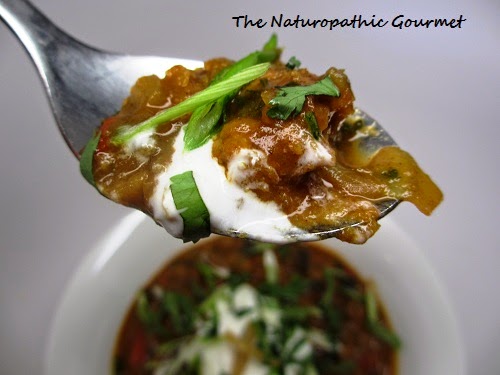