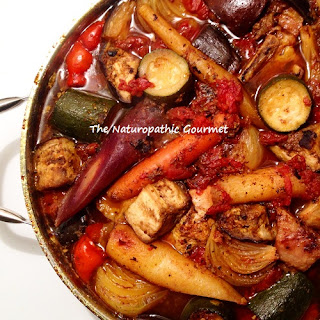 This is the kind of food I want to eat when it's cold outside: hearty, healthy, and delicious. Now that a polar vortex has descended on New York, I'm staying warm by staying inside, so it's a perfect time to make this dish. It takes some time to put together a tagine but it's not difficult and the finished meal is always worth the effort. The mouth-watering aromas released as it cooks low and slow only build anticipation.

Braised dishes like tagines are always crowd pleasers and it's easy to tailor them to any taste. I used bone broth and a combination of lamb and chicken, but vegans and vegetarians could use vegetable or mushroom broth and chickpeas instead of meat. The amount of meat (or beans), vegetables, and spices you'll need will depend on how big your cooking vessel is and how many people you plan to feed, so below you will find general guidelines.

To serve 4 to 6 people, use about 2 pounds each of bone-in lamb and chicken, 1 large onion, 6 carrots, 1 eggplant, 2 zucchini, 1 bell pepper, 1 cup of tomatoes, 4 cups of bone broth, 1/4 to 1/2 teaspoon of the stronger spices (cinnamon, cayenne, cardamom, allspice, black pepper) and 1 teaspoon of the milder ones (cumin, coriander, turmeric).