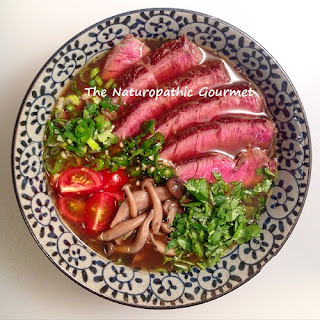 Soup is a great dish for the change of seasons when we crave food that’s lighter but still satisfying. This recipe has everything a healthy meal should contain: vegetables, protein, and healthy fat. It’s my version of the Vietnamese favorite called pho (pronounced "fuh").


Traditionally, this soup is made by layering toppings on a bed of rice noodles bathed in a fragrant broth. I wanted to make mine gluten-free and grain-free, so I substituted shredded Savoy cabbage for the noodles.

Cruciferous vegetables like cabbage are good sources of fiber, vitamins, and minerals. They are also a rich source of sulfur-containing compounds like isothiocyanates and indoles associated with the prevention of many kinds of cancer including tumors of the breast, prostate, lung, colon, and rectum. These compounds boost antioxidant levels and stimulate detoxification pathways in the liver as well. (Learn more about cruciferous veggies and detox in my book, The Prediabetes Detox.)

I topped my pho with sautéed beech mushrooms, quartered cherry tomatoes, thinly sliced scallions, chopped cilantro, minced fresh green chili pepper, and sliced grass-fed steak. You can use any toppings you like. Other good choices would be chopped seaweed, sliced and sautéed shiitake mushroom caps, sprouts, fresh basil or mint, chopped nuts, and/or wedges of lime. Instead of beef, you could top it with seafood, chicken, or pork. If you're on a detox, omit the honey.

For a vegetarian version, top it with a halved hard- or soft-boiled egg, cubes of sautéed tofu or tempeh, or cooked beans instead of meat. For a vegan version, use vegetable broth, mushroom broth, or bean broth instead of bone broth. As an alternative to shredded cabbage, you could substitute ribbons of spiralized zucchini.

This soup is just one example of how to eat meat as a condiment in a plant-based diet. It's also an economical way to incorporate grass-fed meats into a healthy meal that the whole family can enjoy. Full of immune-supportive ingredients like ginger, garlic, chili pepper, and bone broth, pho is also a nourishing meal for anyone under the weather, especially during cold and flu season. This recipe makes about 3 large (main course) bowls of soup.